In the world of advertising, one of the most crucial indicators of advertisement success is what emotions it evokes. Of course, it’s important for an ad to be noticeable and to draw consumers’ attention, but (especially for video ads) emotions seem to be the key.

The mage below shows the difference in the entertainment level of two Heineken advertisements. It's clear that one of them brings more entertainment to viewers and this pretty clear that this insight can help a lot when planning a campaign.

How to discover those insights?

There are several approaches to do so: conduct a survey in the control group, meet participants to talk with them (ask about opinion, see their reactions), or… use facial coding. Due to Wikipedia: “Facial coding is the process of measuring human emotions through facial expressions”. All these expressions can be detected by a computer using a simple webcam. Algorithms analyze the shape and movement of the main facial features (eyebrows, eyes, mouth) and translate it all into human emotions - joy, sadness, fear, disgust, etc.

To conduct this research we chose 5 Heineken ads, including 4 Heineken 0.0% ads (the message of these four was similar). 27 participants were asked to watch those ads one by one (display for each participant was set in random order) and after each of them to answer a question: How do you feel about this advertisement?

Now, let’s take a look at what we get. For sure all of the ads can be rated positively in terms of eye-tracking results and emotions level. This should be expected as they are high-end ads, of a very popular product, from a big, worldwide company.

Ad1: Heineken 0.0, Now You Can: Presentation

The chart is pretty even the whole time. The score varies from 0.06 to 0.24 points. We can conclude that the lowest point is at revealing the product, as participants don’t know the context yet. They seem to be confused about the reaction of the people in the video, but once it’s explained they tend to smile a bit.

At the beginning of this ad, as in the previous video, nothing really happens, so the entertainment level is close to 0. But once the ridiculousness of the situation is explained the level of entertainment is clearly and significantly increasing (up to 0.24 points on average).

So far, it seems to be the best, most entertaining advertisement. The chart reaches on average 0.32 points when the gag is explained.

The highest grade for this video equals 0.18 points. The chart is flat and it doesn’t change much once the story is explained. Probably not the best choice.

Now let’s compare the 4 ads above with the most popular Heineken ad (from another campaign).

For this video, the entertainment chart rises steadily for the whole time reaching 0.42 points(!). There is no clearly marked climax that suddenly changes the audience’s reactions but the entertainment level is clearly above all previous ads!

And the winner is...

It's clear that "Heineken Commercial Fridge" brings the most entertainment to viewers. It's also easy to discover which advertisement from the 0.0% campaign is the winning one (Parking) as it's entertainment level increases higher than the lowest ones.

The entire campaign is made really well. All the graphs are above "zero" and from declarative answers we know that our participants / participants had lot of fun while participating in RealEye test and watching those ads.

To sum things up

What are the advantages of our solution?

Don’t hesitate, try out our tool yourself and bring your research (and ads) to a whole new level. Remember that the most important thing is how consumers perceive the advertisement - their opinions, but also their emotions.

Surprisingly, for the people that saw the ads for the first time, the results seem to be similar for surveys and facial expressions - winning ads are “Gas station” and “Parking” (although this time the first one wins). The exception is the Fridge ad - the most known one and without a clearly defined climax. Another conclusion is that if somebody has seen the ad before, he/she liked it. This phenomenon of liking what has been seen before is well known to neuroscience researchers. This happened for the Fridge ad - based on the survey results it’s the worst one, but it clearly provides the highest score in terms of entertainment.

There is one more thing that we can do while analyzing results. You can add tags to each participant and then filter the results by those tags. 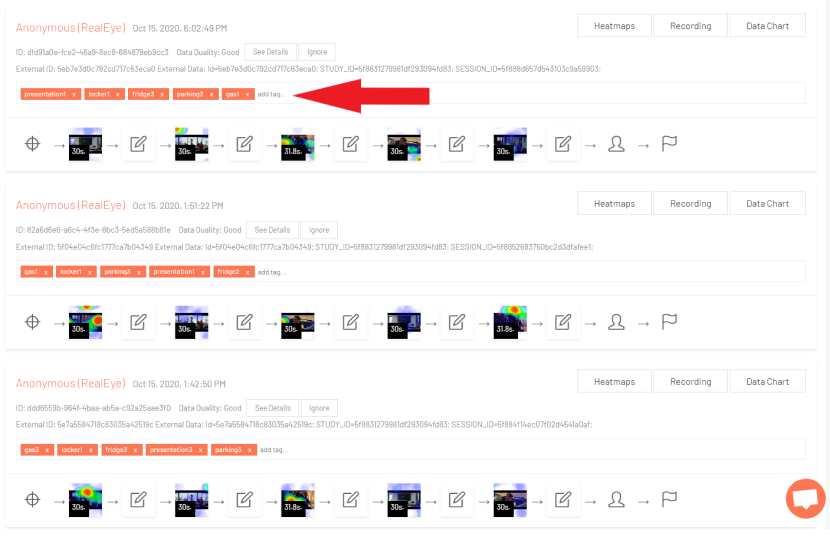 In this case, tags were added based on the questions’ answers. Each participant received five tags (as there are 5 videos) and each tag has an ad name and answer number, where: 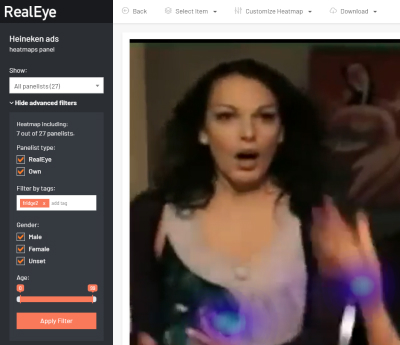 So, i.e. a tag “gas1” means that this participant after watching the gas station ad answered that he saw the ad for the first time and he liked it. Then, on the heatmap panel for every ad you can filter the answers:

Let’s see an example, what we can get from these additional insights. For the “Ad3: Heineken 0.0, Now You Can: Parking” we can see the results for:

people, who saw the ad for the first time and liked it

people, who saw the ad for the first time and didn’t like it

people, who saw the ad before and liked it

People who declared not liking the ad in fact didn’t - their entertainment chart is nearly flat with values around 0 points (with negative values which indicates dislike). For the other two groups that liked the ad, there’s no much difference between the charts (maximum values for both were 0.37 and 0.33 points), but for participants that haven’t seen the ad before, the entertainment chart changes more suddenly after the joke was revealed and maintains slightly higher values.

"Webcam-based eye-tracking has vast potential within market research and RealEye made a great effort customizing their solutions to our needs. We succeeded in having live online interviews with eye-tracking included and we look forward to build on this pilot study to take further advantage of this solution in future research." 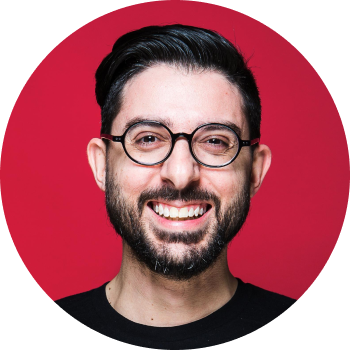 "I'm really impressed with what Adam has created with RealEye. It's astounding how easy and fast it is to track and report on eye movement for a page or design."

Trusted by freelancers, small to big companies, students, and universities.

How accurate are the eye-tracking results?

RealEye studies are proven to be around 110 px accurate. This allows analyzing users interaction on a website with precision reaching the size of a single button.
We predict the gaze point with frequency up to 60 Hz.

Who can participate in my study?

Either your own or RealEye participants. You can invite your users or panel and share the study with them using a participation link. All they need to have is a laptop/PC with a webcam.

We also have a network of panelists from all over the world - mainly from the UK and the US. Randomly picked users can be assigned to your task. They are called RealEye participants. We will not show them your stimuli before the test starts, so their interaction will be natural.

What equipment or setup does RealEye require?

Can I pay per study?

There are only monthly payments, so there’s no possibility to pay per study. But keep in mind that you can cancel your license any time (even in the same month) - you’ll keep the account access until the end of the billing period (30 days from the last payment).

Can I integrate RealEye with other tools?

You can easily integrate the RealEye tool with external tools (eg. surveys), but also compare the results obtained from other tools using our CSV file (i.e. by the timestamp).

Point your smartphone camera at this QR code and confirm opening the website.